The Heirs, gli eredi, of Fontamara. Back to Pescina from Florida Atlantic University 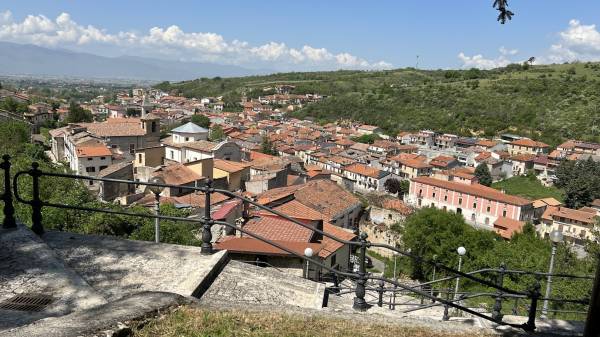 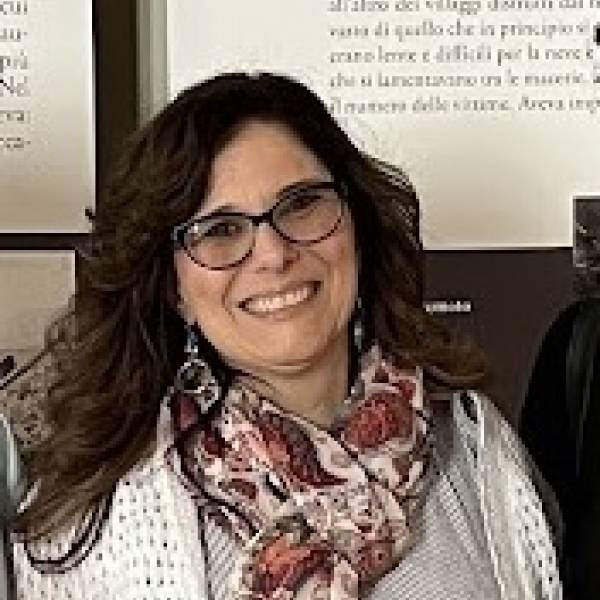 
In truth I am an expatriated heir to Fontamara, daughter to one of the fortunate contadini del Fucino who found love and an escape in the naïve Italian American tourist celebrating her college graduation on a chaperoned visit to Italy

The Heirs of Fontamara (Leggi la versione in Italiano)

An excursion or a holiday is commonly a trip to a novel place that fills the traveler with excitement, sometimes even ignites a sense of adventure in pursuit of the unknown. My cherished excursions to the Parchi Letterari in Italy this past summer met each of these objectives. My itinerary included entire days wandering along the secluded paths that were dear to Ignazio Silone, Gabriele d’Annunzio, Ovidio, Giacomo Leopardi, and Carlo Levi. I engaged in their same sensory experiences as I revisited places I had encountered through their literature and witnessed in three-dimensional arrangement of the pages of a text. The sensory experience reawakened latent threads of my DNA, reuniting me with the trinity: the connotative, denotative and visual imagery of remarkable Italian authors and artists. At times trained docents guided period reenactments, at others they indicated artifacts and left the rebuilding of plot and setting to my interpretation.
The most magical parts of these journeys unfolded immediately beyond the curated walks, in Dickensian encounters with the spirits of the past embodied in tangible human forms. My Italian friends and relatives asked why I favored filling so many moments of a month-long work/holiday with visits to the Literary Parks of Pescina, Anversa, Sulmona, Recanati and Aliano rather than dedicating those days to bucket list tourist destinations. Well, there must have been the inkling that I would meet Nena Di Simone at the foot of the stairs leading to Silone’s tomb or the lone nonagenarian on his electric scooter who would guide us to the only restaurant in Aliano. These two living artifacts were the true gems of the exhibits they call their home, and the windows into the souls of the eloquent geometaphors that drew me to these sacred spaces.

In truth I am an expatriated heir to Fontamara, daughter to one of the fortunate contadini del Fucino who found love and an escape in the naïve Italian American tourist celebrating her college graduation on a chaperoned visit to Italy that included a stay in her sister-in-law’s hometown. This area and its reality, as Silone articulates, appeared to be the antithesis of the enchanting lands one reads about in Italian literature, and even a stark contrast to the coastal town of Senigallia to which my mother traced her own roots just a few decades before. But smitten by the exoticism of outdoor plumbing, animals braying within the confines of the family home, and an idiom that in no way matched the lexicon and syntax of her previous knowledge of Italian, my mother chose this man to be her husband. They were married in the local parish, in a mass celebrated by the same clergyman who had officiated the funerals of five of my father’s nine siblings as well as his grandparents; the same priest who made his rounds at harvest time and when the new wine was tapped, to skim the first fruits off the meager portions of this family who regularly shared glasses and utensils around the dinner table.
My grandmother and the womenfolk, aside from my eldest aunt, did not attend the wedding ceremony. They were preparing the banquet held in the family home, complete with all trimmings: le sagnette, sausages, fruits, and wine produced from the fruits of their own labor. The feast was accompanied by the accordion and capped off by a brawl just prior to seeing the newlyweds off to the neighboring village inn for their honeymoon.

These memories are vivid to this day, to those who lived them, those who embellished the facts, and to anyone who would listen to them for, indeed, “Sono comuni a ognuno i fatti veramente importanti della vita: il nascere, l'amare, il soffrire, il morire; ma non per questo gli uomini si stancano di raccontarseli” (Silone 19). Ironically, when our family relocated to this town at the foothills of Monte Saviano in the 1980s and my eighth-grade Italian literature teacher assigned the reading of Fontamara. Dictating an introductory biography of Ignazio Silone, deceased only a few years earlier, the narrative and the language were not so foreign to me. The opening pages describing the fabricated setting of Fontamara as a village that “somiglia dunque, per molti lati, a ogni villaggio meridionale il quale sia un po’ fuori mano, tra il piano e la montagna, fuori delle vie del traffico, quindi un po’ più arretrato e misero e abbandonato degli altri” (3), resembled the state of my father’s Marsican town in his youth and, to be frank, bore similarities to its current state.

Despite my father’s optimistic temperament and attempts to reminisce only about the joyful shenanigans of his youth when in the company of our compari in America, setting foot back in the soil of Abruzzo sparked a pessimism in him that aged him like the wheels of cheese in our cantina. The focus of conversation rarely deviated from the land and the livestock. These were as precious and problematic as one’s own family.

But my generation did break this cycle. Each of the cousins obtained a college degree; some broke ties with the town and emigrated to other regions. And I, a Florida resident, return regularly to pay homage to the hallowed ground that marked my formative years. The pilgrimage of 2022 was singular. It was my first international travel post Covid, and a return to my paternal hearth as a doctoral candidate in the discipline of Italian American studies; outcomes that surpass the expectations for the daughter of that contadino del Fucino who, himself has since proudly earned his American citizenship and no longer identifies with the primitive mindset of his native region. I shoulder the responsibility to keep (his)story alive and document its progress for the grandchildren who may read Fontamara, may drive through Fucino, may feast on arrostincini grilled from the famed ovine who graze in these mountains, but they are unlikely to ever have the dirt of Fucino embedded in the cracks of their workworn skin, or ever be awaken from a deep slumber to the sound of wolves attacking their flock.

Affirming these personal memories in connection with Ignazio Silone’s literature about this demographic was the draw to the Parco Letterario in Pescina. The curators did a remarkable job of explaining the environment in which Ignazio Silone was raised. Their guided tour between Silone’s public and private spaces communicated his visions for social justice that were on par with the literary minds of his time. He and I both left this geographical space, but it never left us.

After our visit to the Casa Museo Ignazio Silone, my husband (designated photographer) and I trekked the rocky ascent to the writer’s tomb, an iron cross at the base of the old belltower of San Berardo. From there we contemplated the surroundings, and I identified with Silone’s macroscopic life experiences that thrust him abroad, but always guided him back (in his literature if not always literally) to the microscopic view of his corner of Abruzzo, a perspective rooted in solidarity with the subalterns of this area. On our return to our car, we peeked into the church of Sant’Antonio for respite from the noonday heat. As we stepped out onto the piazzetta, still overwhelmed by the tangible presence of Silone and his protagonists in this place, an elderly woman approached us and struck up a conversation. Her toothless mouth pronounced a mixture of Italian and Abruzzese that was only a little foreign to my ears. Her demeanor was that of my own grandmother, and she must have interpreted my quest to reconnect with my forebears as she motioned me out of the sun and into a shady spot and began to recount her own history as a child who, growing up in this part of Pescina, frequently saw Ignazio Silone on his return visits. Epitomizing the author’s words in L'avventura d'un povero cristiano, “In provincia i segreti hanno vita breve.” she described the town and its inhabitants of various social strata, in reverse chronological order, finally recollecting with genuine enthusiasm the return visits of Ignazio Silone. He was a celebrated local figure, beloved by the children whom he would entertain picking fruits off the hillside almond and apricot trees. She also voiced in detail the pathos of a people who had succumb to the Fucino earthquake in 1915, who were separated by emigration, abused by war, betrayed by their government, dominated by the industrialized north, and targeted by inescapable illness and famine. The story of the hidden peasants who inhabited this abyss, is part of my inheritance.

I am again reminded of Silone’s thoughts, “Sono comuni a ognuno i fatti veramente importanti della vita: il nascere, l'amare, il soffrire, il morire; ma non per questo gli uomini si stancano di raccontarseli” (19). In fact, in the course of our conversation, I discovered that Nena Di Simone had acted as Cicerone to at least one other doctoral student decades prior, one who went on to become a distinguished professor of Italian and Italian American studies. She lamented that they lost contact once online communication replaced traditional letter writing. Well over an hour later, her two dogs had tired of our conversation long before either of us did. There was no natural conclusion to our discussion. My one regret is that I did not anticipate to record her oral history. Our time together was a lesson on local history, politics, ecology, dialectology, culture, and empathy, and we were equally enriched by it. With Abruzzese hospitality coursing through her veins, she invited us to her home for lunch, but we graciously declined, and we parted ways; she clutching her dogs’ leashes in her hands and I clutching my inheritance close to my heart. 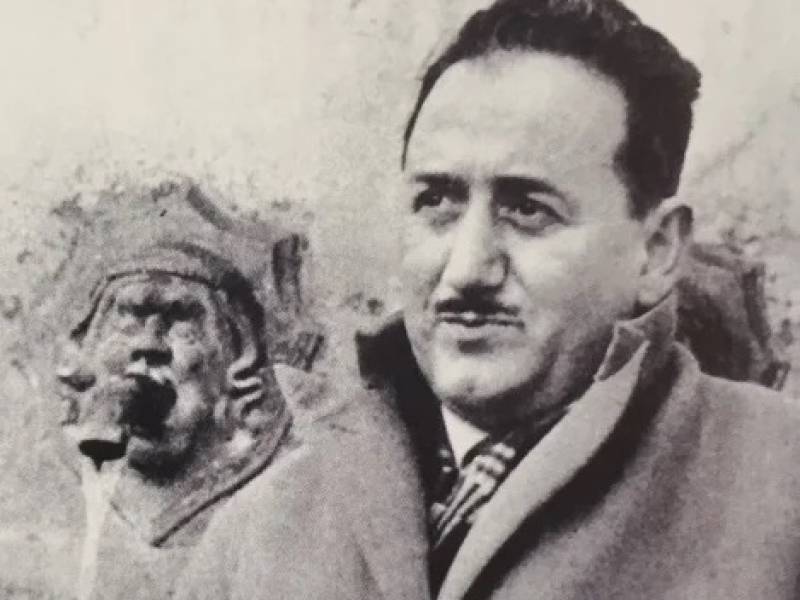 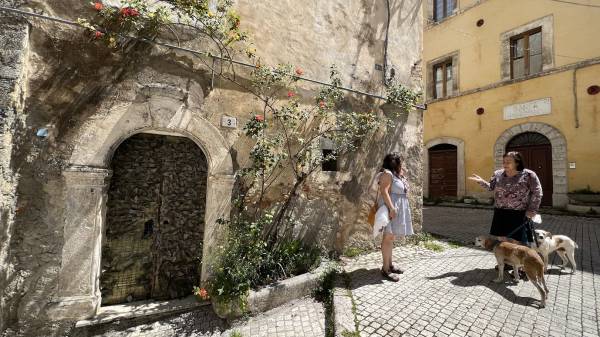 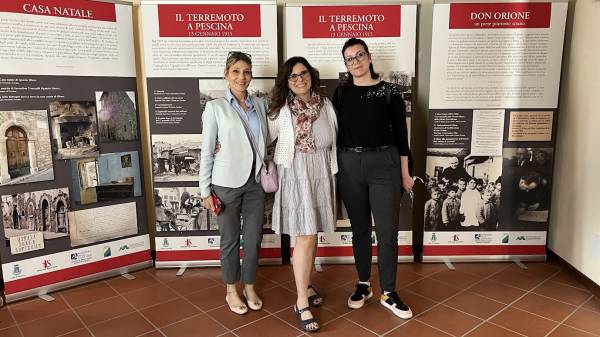 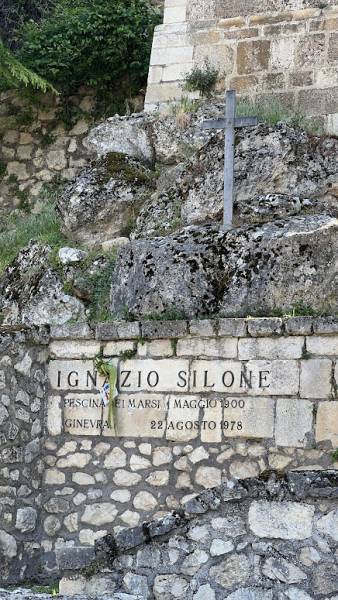 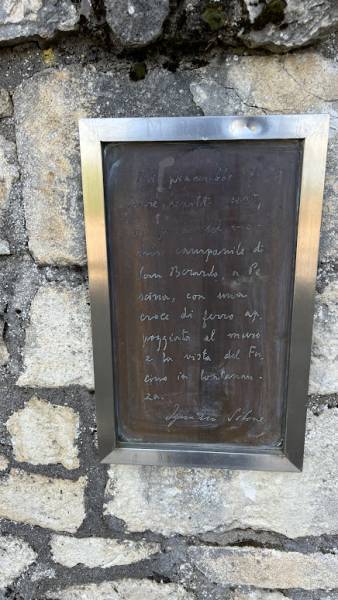 The Nobel Prize Sigrid Undset reflects in her works the human depth, the intellectual freedom and the generosity with which she lived against the tide, as in the conversion to Catholicism in Rome or in the anti-Nazi resistance in Norway (in italian too)

Einar Stamnes's book dedicated to Røst, the outermost island of Lofoten beyond the Arctic Circle. A captivating work on the environment, myths, traditions, culture and 5 centuries of Community relations with Venice and Italy